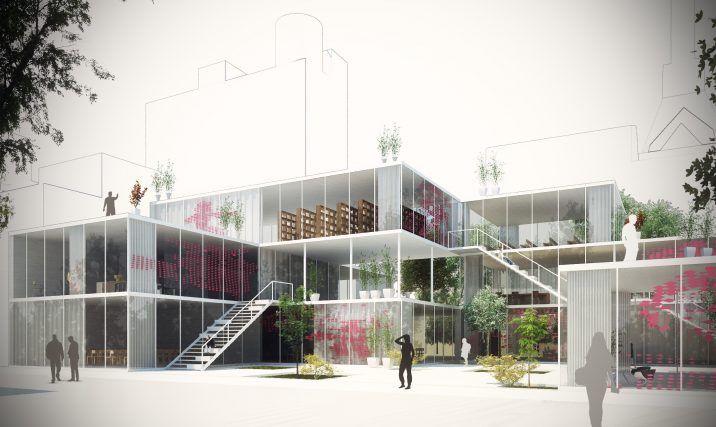 Bearing in mind that the competition site is located in a busy part of Tokyo, we decided to create a connection between our site and the city.
Thus designing a circulation route connecting the streets on the East and the North side together, introducing a welcoming environment where
people passing by are encouraged to walk through our site instead of having to go around the building. By doing so, not only are we creating
a faster route for pedestrians, but also giving them the opportunity to observe and appreciate the pop culture exhibition, showcased outside.
Through a detailed analysis of the site and the context, what struck us most was the beautiful green nature of the site attached to ours.
Therefore to further blend in and engage with the surroundings we decided to create a similar environment by incorporating greenery to our
project, supposedly combining the two sites from a birds eye point of view and creating pleasant outdoor spaces on three different levels.
Every individual indoor space on every floor has its own private terrace space further emphasizing the relationship of inside to outside and the
hierarchy of spatial linkage.
The design of the Pop Culture Lab follows a well-considered arrangement, placing the main public elements on the ground floor close to
the main road whilst having the semi-public spaces on the floors above distancing them from immediate street access and noise as well as
increasing privacy.
Patterns participate in linking one surface to another and intellectually, they may, through the development of their transcendent qualities,
guide the observer to higher levels of realization. Thus striving to engage every aspect of our design with the introduced pop culture, Japanese
animation has been pixelated and arranged on the facade of the building to further inspire the observer.